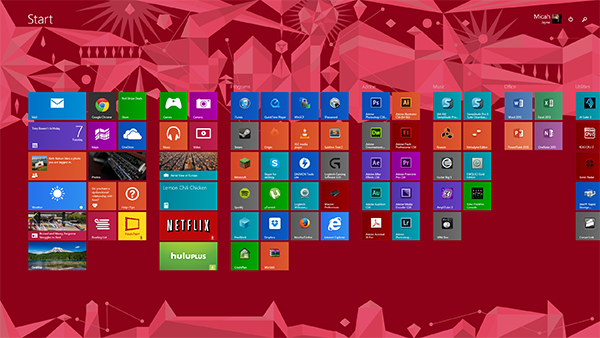 At last, I'm back home for winter break after another semester at College Park. It is nice to be reunited with my beloved desktop computer, which I've finally been able to install Windows 8 on. I've got to say, I'm a fan. I've been using a Windows Phone for almost two years now and I like the Metro interface. I can't say I really miss the old start menu at all, and once you learn your way around, and all the shortcuts, I've found it actually makes things easier. The ability to just press the windows key and start typing to launch the program you're looking for is a nice feature, like spotlight on Mac or numerous app launcher programs. The new task manager is great too. Also, this is probably due to getting a fresh install more than anything, but I've noticed a considerable speed increase as well. Nothing like a good-old winter cleaning.

I like the fact that the same apps are available on both the tablet and the desktop. Not all apps are useful; for instance, it doesn't make much sense using the Facebook, Amazon, or Wikipedia apps on the desktop when you can just as well use the full site. However, I enjoy the Netflix and Hulu apps, and other things like Fresh Paint and Jetpack Joyride are cool to have available on the desktop. There are plenty of iOS apps that I would like to be able to use on Mac and it's unfortunate they can't be. The built-in Mail, Calendar, People, Messaging, Weather, etc. apps are great as well and I've been using them quite a bit.

Another source of my love for Windows 8 stems from the resolution of a problem I've been having with my audio interface ever since I've gotten it (and the one before it as well, which I returned because I assumed the interface was the problem... turns out it wasn't). I was unable to use it as my default sound card without getting nothing but awful static for sound, and I constantly had to power cycle the interface every time I opened a program like Reason or Samplitude in order for it to work. I ended up having to feed the output from the built in sound card on my motherboard as an input into the interface to get sound from the computer to come through my speakers. Anyways, ever since I installed Windows 8, this problem has gone away completely. I'm able to use the interface as my default sound card and I no longer have to reboot it for it to work properly. This makes me happy.

Overall I think Windows 8 is a solid upgrade. Anyone who doesn't like the new interface or misses the old start menu can install another shell like this one, but really once you learn a couple shortcuts you won't miss a thing!